Our patients and their families are the focus of the Bon Secours Hospice team. Patients continue to receive care from their own physician while receiving added support and comfort from our team members who visit patients and their families regularly to give care, answer questions, teach new caretaking skills, and make each day as meaningful as possible. A member of our hospice staff is available 24 hours a day, 7 days a week.

“My mother was in the later stages of Alzheimer’s disease, and my father had promised her nearly a decade before that he would care for her at home for as long as he could. He’d done just that, except during a brief time when she was hospitalized and then moved to a nursing facility. Hospice services made it possible for him to bring her back home and provided the support he needed.

Nurses Sherri, Pat and Lynn were consistently efficient and reassuring and ever-respectful of my parents, and social worker Julie Rayford was instrumental in scheduling the nursing assistants that became a necessity. Sherri was in the house when my mother died, and we are so grateful for her presence. I wish I’d made note of everyone’s last name, but during that 48 hours I’m not sure I could have told you my own.

A week later, I know my father takes comfort in a promise kept. My family’s relationship with Bon Secours Hospice was relatively brief, but the impression it left is considerable. My thanks to the Peace Team for your compassion and commitment.” 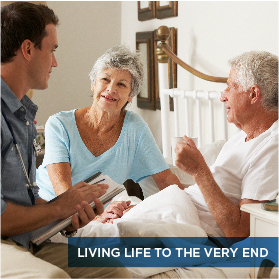